The Victims of NEOM City in Saudi Arabia Need Justice 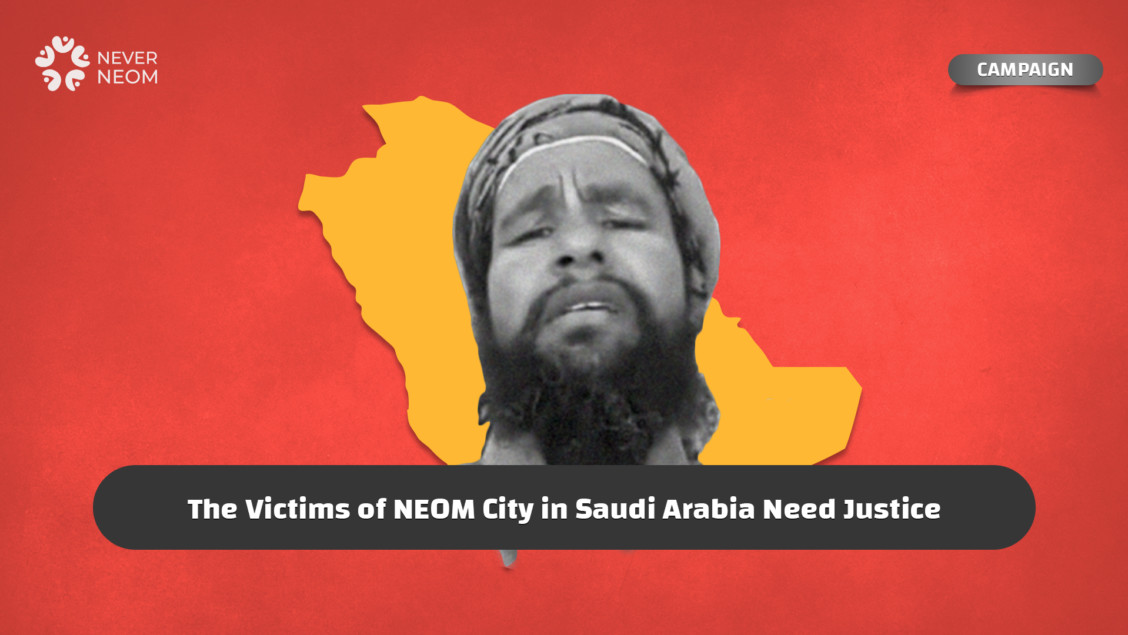 On 17th June 2020, a campaign entitled “Justice for NEOM Victims” was launched with the aim of achieving justice for members of the Huwaitat tribe in Saudi Arabia who have either lost their lives or been imprisoned as a direct result of the building of NEOM city in Saudi Arabia.

The campaign has been launched by Alya Al-Huwaiti on behalf of the victims of NEOM in order to give a voice to the Huwaitat people so that their legitimate concerns are raised and addressed, and to stop further killing and abuses. It is a campaign to draw attention to the plight of NEOM Victims, and to form an organisation for them to fight to protect their human rights.

Contrary to promotional videos released by NEOM claiming that it is to be built on ‘virgin land’, the Huwaitat tribe have been living on various tracts of that land for hundreds of years. The Huwaitat people are not against the building of the city, however they have a right and desire to be included in its construction and to benefit from the use of their ancestral lands. Unfortunately, despite many promises, this has not happened.

The Advisory and Executive Boards of NEOM are made up of internationally recognised and respected names in the world of Architecture, City Planning, Investment and Environmental Development. They have yet to respond to requests to intervene to stop the human rights violations being perpetrated in the name of the NEOM Project.

Sarah Leah Whitson, former director of the Middle East division at Human Rights Watch, said that “The Saudi Government wants the land without the people. It has no respect or regard for Saudi citizens. It wants to build a futuristic city in Saudi Arabia but does not want any Saudis in it – certainly not the Huwaitat people and is treating them as disposable objects that con be removed and moved around at will.”

“This is very reflective of the Saudi Governments’ attitude towards its population.” Whitson added.

Arbitrary arrests and killings Although construction on the project has now stalled owing to a dip in oil prices and the global Coronavirus Pandemic, the process of evicting Huwaitat Tribe members by the Saudi authorities has been going on for some time. The evictions have clearly not taken place according to internationally recognised norms including appropriate compensation as well as genuine options for relocation. In the tragic case of Abdul Rahim Al-Huwaiti, his attempts to resist eviction were fatal and he was killed by the Saudi authorities in his house as he tried to resist being removed.